A Critical Summary of "The Second Coming" by W.B Yeats


a) The cyclic concept of life which gets away from its centre during its spread and the spread comes to a halt, eventually leading to some sort of rebirth.

b) Christian concept of the rebirth of Christ to rescue the suffering humanity.

c) The large scale production of weapons and the World War I with its aftermath.

The poet has described the spread of time as "turning and turning" i.e. the outward flow of time which is about to complete its life cycle. At this stage, the entire human race is lost to confusion and cannot clearly see what was conveyed and professed to them by Christ. The poet sees a beginning of the fall of Christianity's rise which has already been showing cracks. Further, the Christian world, especially the Europeans had already succumbed to the doubts regarding religions. Orthodox church was being put to questions.

"Turning and turning in the widening gyre
The falcon cannot hear the falconer;"

Now European civilization is about to fall to decadence because the centre is unable to hold on. The centre, if seen from Orthodox Christian church, is Christian religion which for Yeats has already weakened. There are other eminent hints which mark the near destruction and end of the world e.g. mass scale production of deadly weapons. Therefore, the world is likely to go to the dogs before its rebirth when Christ would return as a Saviour.

Yeats sees the world of his time as "blood-dimmed" because of the horrors of World War I that he has seen. Man has lost even his "ceremony of innocence" which he once used to display for real innocence. Nothing remained human during the bloody wars that Europe went through. He reminds us of the war madness and savage thoughts of man which dominated the beginning of twentieth century. Therefore, he feels the strong and mighty are the "worst" that "are full of passionate intensity".

If we refer ourselves to the past events as described in Bible and the Holy Quran; whenever the worst situation arises in the human world, help comes from God Almighty to rescue humanity. Therefore, the poet feels:

"Surely some revelation is at hand;
Surely the Second Coming is at hand."

The poet looks towards heaven for the rebirth of Christ to come for the salvation of man. 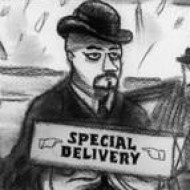 "The poet looks towards heaven for the rebirth of Christ to come for the salvation of man."

That interpretation is entirely unsupported by the text. The final lines of the poem suggest Yeats's real meaning:

"And what rough beast, its hour come round at last,

Slouches toward Bethlehem to be born?"

The references to "revelation" and "second coming" are references to certainty of events, great or terrible, which are looming, and the notion that false prophets will spout lies while wearing a mantle of "righteousness". The poem is about the return of human aggression and self-destruction. Not about the rebirth of Christ.

4
0
RSS Alerts
Page 1 of 1
Notify Me
Are you sure you want to report it?
Share a link to this comment
Close